Celebrating 70 Years of the Flying W Ranch in Colorado Springs

Celebrating 70 Years of the Flying W Ranch in Colorado Springs

The Flying W Ranch’s 70th anniversary as a beloved Colorado Springs attraction is a milestone that has been hard earned. This rugged and determined venue has taken its share of the punches in recent years and has still come out shining bright. For seven decades the ranch has offered chuckwagon suppers, animal encounters, education and family fun in the Pikes Peak region. It’s a favorite stop for visitors and locals alike, offering the quintessential cowboy experience against the backdrop of the majestic Rockies.

We’re sharing the history of this Colorado western staple, from its early days as a working cattle ranch to its present as the perfect place to yee and haw.

Take It Way Back: When the Flying W Was Home on the Range

The Flying W Ranch began its adventure in Colorado Springs in 1947 as a working mountain cattle ranch. It was started by Don Wilson, a rancher who moved his family from the flat plains of Kansas to Colorado Springs. He set up on a homestead on land that once belonged to General William Palmer (yes, the one for whom so many things in the Pikes Peak region).

Wilson’s daughter, Marian Wolfe and her husband, Russ Wolfe, soon joined him in Colorado Springs and helped with day-to-day tasks on the ranch. The Flying W Ranch notes that the ranch bred Black Baldy calves, a combination of Hereford and Black Angus. Wilson also tries his luck at raising prize quarter horses during that time period and he and his brother were able to be quite successful.

Meanwhile, the Wolfes were hot on the trail of an innovative idea: What if people could enjoy a slice of ranching life without having to risk it all in the Rocky Mountains? Russ Wolfe led horseback rides while Marian served the meals that would become the heart of the Flying W Ranch — the chuckwagon supper. By 1953, it became a veritable hit attraction and its future as an interactive ranch experience was secured.

The events grew and advanced as people clamored for their turn to experience life on an authentic cattle ranch. The Wolfes continued to add on buildings, activities and events. From the beginning, the Wolfes included live music performances, but the official debut of The Flying W Wranglers launched in 1957.

According to Spotify, the Flying W Wranglers are the second longest-lasting country western group in the history of the genre. Spotify also notes that the only reason the Wranglers never achieved the star power of the first longest-lasting band (Bob Nolan and the Sons of the Pioneers) is because the Wranglers had the misfortune to hit the airwaves at the same time as Elvis Presley and the Everly Brothers.

The years that followed would see the ranch grow in popularity. For decades, the business weathered the standard ups and downs of any other entertainment venue. However, the Wolfes persevered and continued to operate a thriving chuckwagon experience. 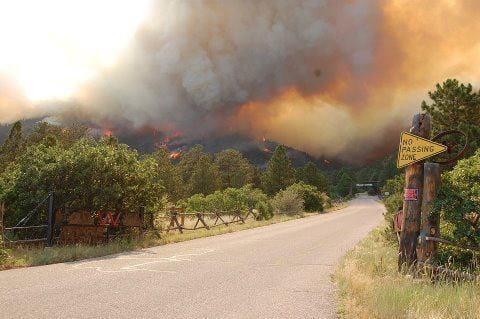 It may seem like a rough transition to speed through 60 years to the near present but the decades that followed were pretty benign for the Flying W Ranch. Then came the Waldo Canyon Fire of 2013. The Waldo Canyon fire devastated the Pikes Peak region, and the Flying W Ranch did not escape unscathed. The fire ripped through the property destroying everything but the library. The destruction was profound.

The Flying W Ranch was forced to close indefinitely. In 2013, any hopes of opening were dashed by flooding — a common occurrence after wildfire damages a region. It would take 7 years for the ranch to recover and reopen. Even with a rough start (the ranch had to contend with the pandemic restrictions and protecting guests), the Flying W managed to get back on track and reignite the customary campfire for customers once more.

The Future of the Flying W Ranch

Today the Flying W Ranch is open year-round as a top tourist destination and a fun place for locals to have a fun family evening. When the family rebuilt the ranch, they took the opportunity to make lemonade out of their fire and flood lemons and create infrastructure that would support the large crowds that flock to the supper each evening.

One of the most popular additions to the Flying W Ranch was their improved wedding venue options. Many brides and grooms have been delighted to hold their weddings in a location filled with memories of family suppers and time spent on the ranch.

While you won’t find the cattle herds of old, it still has farm animals kids can meet and nightly music with the famous Flying W Wranglers. You’ll still get tasty cornbread and zesty beans with your supper, too.

In the days ahead, the Flying W Ranch plans to open a general store where you can buy western gear, fun gifts and pick up your favorite Flying W Wranglers albums. They also plan to offer BBQ you can order online and ship anywhere in the country. If you can’t pay a visit to the Ranch to celebrate with the Flying W crew this year, maybe toast them with some BBQ at home.

We’re talking about the pests, the punks and the occasionally creepy creatures that lurk (or swoop) in the dead of night.