Give the Gift of Adventure

The Gift of Adventure

Gift giving is one of the great joys of human existence.  Finding that perfect and unique present for your favorite unique and totally imperfect person can be a Herculean feat. Stuff, possessions, things — is there an object that can encapsulate the truly boundless nature of your appreciation of your favorite person?  Rather than adding to stacks of things soon forgotten, give the gift of adventure instead.  And better yet, an adventure shared: the place where memories grow and become brighter.

Actually, the best gift you could have given her was a lifetime of adventures.

You’ll want to word this one carefully.  Telling your bestie or the love of your life that you think they should go jump off a cliff can sometimes give the wrong impression.  We recommend you use words like fly and soar and even take the plunge if your relationship is on that level.

There are five ziplines in the Pikes Peak region, ranging from the kid friendly Bat-a-pult at Cave of the Winds, to screeching across a gorge 1200 feet in the air and several stops in between. 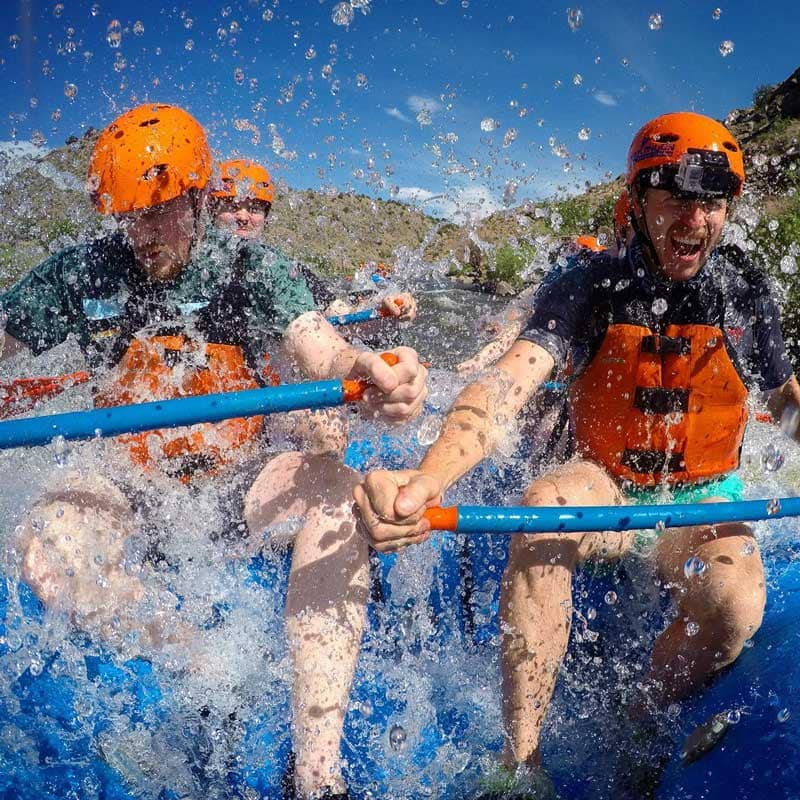 There are few adventures more iconically Colorado than white water rafting and the folks at Echo Canyon River Expeditions have more experience on the river than anyone.  We recommend saving this one till the balmy days of summer, obviously, but once the snowmelt starts, you and your loved ones are in for quite a ride.  Echo has super gentle family floats appropriate for kiddos as young as four all the way to serious white water rad-ness up to Class V Rapids. 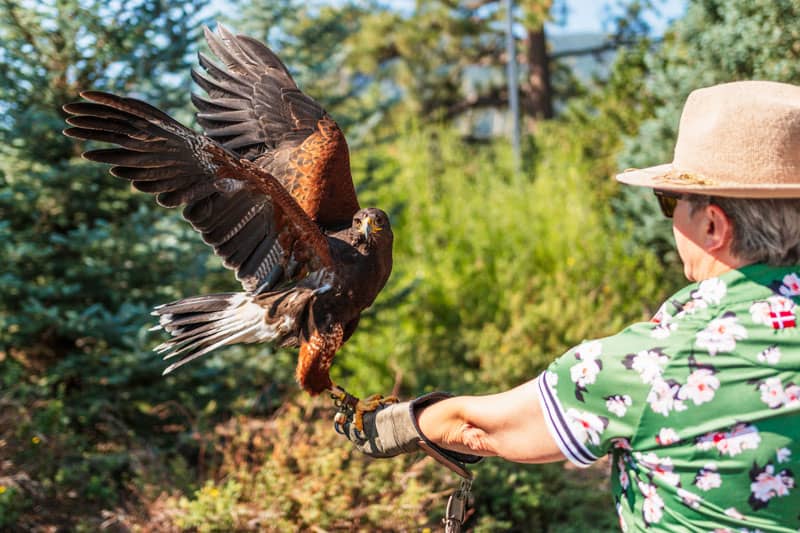 Known as the sport of kings, falconry is the ancient art of training and utilizing birds of prey to hunt.  Broadmoor Outfitters has both beginner and intermediate lessons, you’ll learn all about owls, hawks and falcons and have the opportunity to have them land on your arm.  Unlike anything you’ve ever done before! 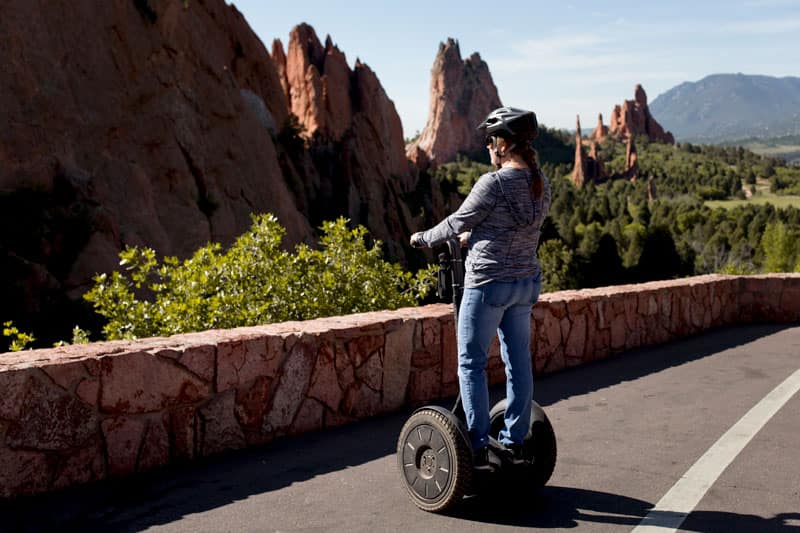 Lean in, this is one adventure that literally responds to every move of your body.  Take a quick Segway lesson — lean forward and you speed up, lean back and things slow down, just like life.  Once that feels natural, you’re ready to cruise through the one of the most popular parks in the country.  Take in all those spectacular red rocks in Garden of the Gods, at your own and your own power.  This is just one of many experiences awaiting you with Adventures Out West.  Keep reading for more excitement!

We weren’t going to hold the suspense for too long, your adventures will have plenty of excitement without those shenanigans.  Adventures Out West also offers hot air balloon rides.  Start early in the morning out east of town and rise as the sun slowly turns the mountains from violet to pink.  This is definitely one for the bucket list and if you happen to be ready to take the plunge like we suggested before, Adventures Out West offers private rides perfect for the most important question of your life!

Italian for “iron path”, a via feratta is a protected climbing path of steel cables, rungs and ladders fixed to the rock of a canyon wall.  Climbers affix a harness with two leashes that allows them continuous connection to the path and limits any potential fall.  Originally employed throughout the Swiss Alps and used significantly by the Austro-Hungarian Empire during the first World War, the via feratta has become mainstream for outdoor adventures.

Here in Colorado, our geology creates the perfect space for an iron path or two.  Cave of the Winds Mountain Park is tucked in the foothills of Manitou Springs. With Pikes Peak as the backdrop as you scurry along the cliff side this a great course for novices and experts alike, and quite friendly to those not super fond of heights.  The via feratta at the Royal Gorge Bridge and Park has a couple of different courses available, also great for the new and the experienced.  However, the iron path at the Royal Gorge is on the cliffs of the gorge.  Less friendly for your acrophobics, but an absolutely unforgettable experience any way you slice it!

I know what you’re thinking, Terror-Dactyl!? Never heard of it!  Well there’s a reason for that!  This ride is the first of it’s kind, but rest assured it is aptly named.  It sits on the edge of a 200 foot cliff overlooking beautiful Williams Canyon.  Only those with nerves of steel are brave enough to be launched 150 feet into the canyon at nearly 100 miles per hour.  This is definitely one for the memory books!

There are many ways to enjoy the giant mountain for which the entire region was named, but this is the way for adventurers.  Challenge Unlimited shuttles you to the top of Pikes Peak, all 14,115 feet in elevation.  They give you a mountain bike, a quick crash course in shifting, and send you sailing down 20 miles of the most pristine downhill rush you can imagine.  They’re with you every step of the way, with safety gear, extra layers for the cooler mountain temps, water, snacks and moral support.  But that feeling of the wind in your hair, and the closest you ever come to the feeling of flying while staying on Terra Firma, well that’s all you.

The only outfitter licensed for horseback riding in the world famous Garden of the Gods Park, Academy Riding Stables has been offering this one of a kind tour for decades.  Their guides know all the best park legends and will point out plants, animals and rock formations along the way.  Get your cowboy on, and experience the Garden of the Gods the way is was intended, the way your grandpa saw it, by horseback!

Last but not least, we take you back to the spectacular Royal Gorge Bridge and Park.  This particular ride is well known and seen at many of the top amusement parks in the world.  Riders in groups of one to three are strapped in horizontally to a cable suspended high above, lifted way into the sky and released to swing like superman through the air.  What makes this one so special is its location.  The Skycoaster swings out over the Royal Gorge, 1200 feet over the Arkansas River.

With so many amazing things to do in Colorado Springs and the Pikes Peak region, the tricky part isn’t finding an amazing adventure for your favorite people — it’s finding only one.  Our recommendation: choose an outfitter and call them to talk about all of the different options.  They can give you awesome first hand understanding of each activity so you can find the perfect gift (or perfect adventure for you, we don’t judge.)

Celebrate turkey day with your loved ones by supporting these local attractions and restaurants open on Thanksgiving in Colorado Springs.

Unique Gifts from our Attractions

Support local shops in Colorado Springs with some of the most unique gifts in the region for this holiday season.

Dressing for Winter Weather in Colorado

In the span of a week, it can go from 70 to -14, from sunshine to blizzard, and everything in between. Learn how to dress for winter in Colorado!