Fireworks off Pikes Peak for the new year!

Do you know the story behind the spectacular fireworks display launched from the summit of Pikes Peak at midnight on New Year’s Eve? It’s a tale that’s particularly Colorado in nature, involving snowstorms, adventure and the inexplicable urge to conquer a 14er. Sit back and have a good read about the foundation of the tradition and the cool crew that carries it on to this day.

In 1920s Colorado Springs, the ascension of Pikes Peak on foot was, much like today, quite a challenge. There were attempts to tame it — as good as anyone can “tame” a 14er. Since 1914 Fred Barr (yeah, that trail is named for him) had been steadily plugging away at creating a burro trail up the peak, including supervising the portion of the trail that touches the present-day Manitou Incline. In 1922, he added the famous hiker stop-off, Barr Camp, which sat at over 10,000 feet above sea level. (Hikers still use it as a stopping point to this day.) Despite the added support and improved trail, ascending the mountain was — and remains — a challenge for hikers.

That challenge was probably the impetus for the night that would launch a nearly 100-year-old tradition. On Dec. 22, 1922, Colorado Springs local Fred Morath, along with Barr, Morath’s brother and two other friends, decided that ringing in the New Year required a bit more than drinking and carousing. They were going to climb Pikes Peak. In the winter. At night.

The five followed the Cog Railway tracks dressed about as warmly as one could in an era without specialty coats, hand warmers and cold weather boots. It was snowy, windy, icy and, of course, freezing. The aptly nicknamed Frozen Five trudged on, though, climbing steep grades, picking their footing on cliffs and boulders and navigating piles of snow. When they finally reached the summit, they lit flares and fireworks to celebrate, startling the citizens of Colorado Springs and generally accomplishing eternal notoriety.

From that day on, the climb became a tradition that is still continued each year by a local mountaineers club in Colorado Springs known as the Pikes Peak AdAmAn Club.

The name “AdAmAn” was coined by Frozen Five brothers Fred and Ed Morath, named such for the fact that only one man a year could be added to it — “add a man.” The current club is dedicated to these founding five and sticks to the code of one new member each year. On New Year’s Eve, they ascend with a party of 33 members and carefully selected guests and launch considerably fancier fireworks from the peak for the benefit of Colorado Springs and areas even further away.

On Dec. 30th the crew hikes to Barr Camp, where they enjoy a bonfire and settle in for the night and will conquer the rest of the mountain on Dec. 31st

Once at the summit, the crew gets to work preparing for the midnight show. At 9 p.m., they test fire five shells, one for each member of the founding mountaineers: Fred Barr, Fred and Ed Morath, Willis Magee and Harry Standley. From there, it’s an exciting wait until midnight, where everyone in Colorado Springs is treated to fireworks on the peak, a display that colors the snow-capped 14er and draws most people out to watch even on the coldest of New Year’s evenings.

Be sure to take a look at Pikes Peak between 11-11:30 a.m. The hikers flash mirrors from the resting point which are visible to Colorado Springs! 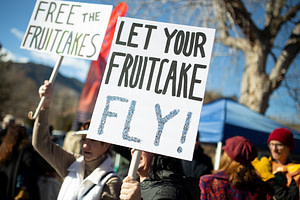 The Manitou Springs Fruitcake Toss should be on your to-do list on Jan. 22 If the name wasn’t self-evident, we’ll lay it out: You get to throw fruitcake.

Discover one of the most innovative and family-friendly museum experiences at the U.S. Olympic & Paralympic Museum in Colorado Springs

Great places to see Christmas lights around Colorado Springs to get you into the holiday spirit!