When your city is so old it can celebrate a sesquicentennial, you’re bound to collect a few ghost stories and urban legends over time. The older a city is, the more likely it is to have a haunt or two settled into its bones. In honor of our official entry into October— everyone’s favorite month of spookiness—we thought we would share some classic ghost stories from the Pikes Peak region. If you’re a local who has grown up here, you may recognize a few of the more well-known haunts. If you’re new, welcome to our historic haunts.

Of all the ghost stories you’ll hear, the tale of Gold Camp Road’s haunted tunnels is one of the most popular. Gold Camp Road begins in Colorado Springs and winds its way precariously to Cripple Creek and Victor (another haunted location we will share later on). There are three tunnels along the gravel road, one of which is collapsed. One of the most common origin stories of this haunt claims that long ago one of the tunnels collapsed with a busload of school children inside. There were no survivors. Well, unless you count the spirits hikers and drivers have claimed to encounter.

Visitors to the location have said that you can hear children laughing and playing when there are no kids anywhere nearby. And many a high schooler has stopped their car in the second tunnel, killed the engine and put the vehicle in neutral to see if the ghosts will “push” the car forward to try to “save” the occupants from their fate. Some people even claim to see tiny fingerprints on the windows after they leave the tunnel.

Another tale from Gold Camp lore goes back before the story of the lost school children. Apparently, the tunnels were doomed from the very beginning. During construction, it is said that part of the tunnel collapsed, burying one of the workers alive. His spirit remains, locked forever to the site of his horrifying demise. Other terrifying encounters include feeling like being watched, being touched or pushed and even physical harm like scratches and bruising. Manitou Springs—Emma Crawford and Other Entities

Manitou Springs has long been a home for metaphysical and mysterious happenings. Locals and visitors claim the energy in the area is just different. Maybe it’s the natural springs, the proximity to the mountains or the quirky inhabitants, but the place just … hums. One of the town’s most popular tales centers on a woman who loved the town, its energy and its healing mountain air so much that she lived their the remainder of her life — and maybe even a little bit longer.

Whether or not Emma Crawford’s ghost ever really wandered the streets is debatable. However, the dear woman did in fact rise from the grave (if you believe the old lore). Emma Crawford made the audacious dying request was that she be buried on the top of Red Mountain after her death. Why is that audacious? Give hiking Red Mountain a try sometime. Then imagine completing that hike while hoisting up your end of a coffin. Emma’s gentleman caller put the love in beloved that day that’s for sure.

Emma’s determined pallbearers hoisted her to the top where she stayed at rest until she was dug up and placed unceremoniously in loose gravel nearby in the name of progress — a saloon. One Manitou Springs legend says that Emma’s coffin was washed from her shoddy new grave by a rainstorm, and sluiced like a toboggan into downtown Manitou Springs. The lore inspired the famous Emma Crawford Races that happing each October. Emma is obviously no longer in the middle of town, but hopeful paranormal enthusiasts do enjoy wandering about her much sturdier new place of rest hoping for a hint of the lady of the legend.

Other entities are also said to haunt Manitou Springs. Both the Iron Springs Chateau have resident spirits, although they are all noted as mostly harmless. No scratching or pushing, just strange sounds, the occasional moved objects and spiritual photobombing. 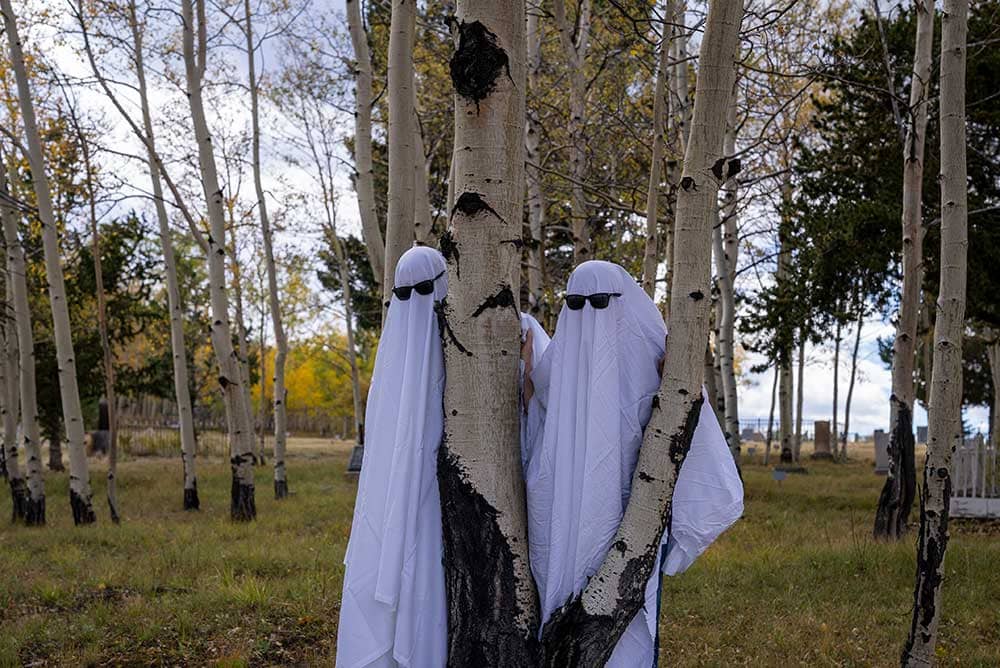 Mining towns always seem to be rife with tales of the supernatural and Cripple Creek is no exception. The once-booming hub brought fortune-seekers from all parts of the country hoping to strike it rich. Unfortunately, mining is a dangerous career. Frankly, existing at all in the 1800s and early 1900s was a risky decision that most regretted immensely. Digging giant holes in the planet and mucking about in them did not improve the odds of survival.

One of the more famous haunts in this literal ghost town is the Imperial Hotel. Built after two different fires burned through the town, the Imperial Hotel was owned by George Long, who lived there with his wife and first cousin (two words to describe one woman) Ursula. George and Ursula had a daughter named Alice, who had untreated mental health conditions. Instead of sending her to an asylum, they chose to lock her in the basement. Alice was probably pretty mad about that, but she likely would have preferred the basement to the institutions of the early 1900s.

Alice was prone to fits of rage and violence. One day she escaped and is purported to have hit her father with a cast iron pan, knocking him down the stairs and killing him. Former guests of the hotel have claimed to hear scratching and knocking at night. George is said to haunt the place of his death, forever in denial that his daughter was the cause of his untimely demise.

The jail in Cripple Creek and both the Buffalo Bill and Colorado Grande casinos are said to have ghosts of their own. There is even a spot in front of the jail where blood is said to disappear after it hits the ground.

These are just three examples of haunted locations in Colorado Springs and the Pikes Peak region. However, there are more — so many more. Discover even more lore by signing up for a regional ghost tour in Cripple Creek or Manitou Springs. Or do a little sleuthing on your own. Bring a voice recorder and a camera and simply wander. Sometimes, these spirits can only manifest in the background and you may catch glimpses in your photos and recordings. However you choose to explore, we wish you many happy hauntings.

Valentine’s Day in Colorado Springs and the Pikes Peak Region

Whether it’s a special evening with your partner or a celebration with your BFF, there’s no shortage of Valentine’s Day fun to be had.