The History of Seven Falls in Colorado Springs

Seven Falls has been a favorite vacation attraction for Colorado Springs visitors for decades — and a gorgeous example of Mother Nature’s vast talents for a whole lot longer. Thousands of people from all over the world have made the journey to behold the series of crashing waterfalls cutting their way through majestic Pillars of Hercules, hiking the trails, snapping breathtaking photos and getting to know this beautiful Colorado wonder. The history of Seven Falls is an interesting one with a central theme — preserving the space so that present and future generations can enjoy the waterfalls and their pristine natural surroundings. 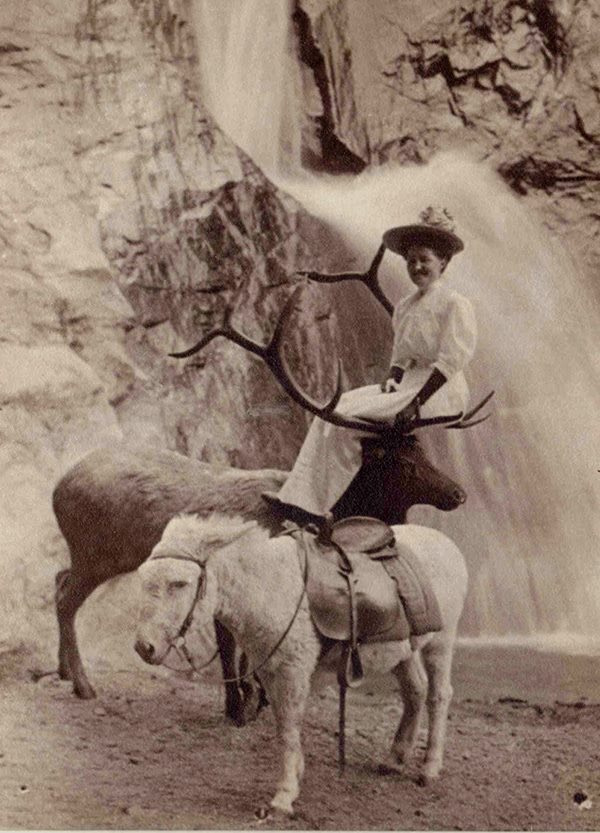 Back before Seven Falls was officially known as Seven Falls, it was a simple chunk of land given to Nathan Colby in 1872 as part of the Homestead Act. The Homestead Act granted land to pioneers in the west, allowing them the rights if they were able to produce an income or resource from the property in a given number of years. The land that contained Seven Falls was a whopping 160 acres and Mr. Colby promptly flipped the tract, selling it to James Hull, a preservationist who built the much-traversed trail to Inspiration Point so that visitors could explore the area. Hull collected other land around the falls and by the time he died and his estate was deeded to his sons, his land holdings had climbed to 1,400 acres.

Seven Falls would pass through many more hands over the decades, but, fortunately, each owner saw the value in protecting the space both as a tourist destination and natural wonder. While different owners would break new trails and add safety modifications or other features to accommodate visitors to the waterfalls — one owner even added an elevator in the 1990s — the beauty of Seven Falls remained largely as it was when first observed by humans. Nature, however, is not always so kind and two powerful floods had a huge impact on the falls and the visitor park. The first, in 1965, wiped the entire visitor park off the map. Slowly, Seven Falls was re-established and it remained a very popular destination, particularly in the summer, when the road to the falls would fill with visitors waiting to park and tour the area.

The second Seven Falls flood re-shaped the park forever. In 2013, five days of immense rain stuck the Pikes Peak region after two summers of tragic fires and long dry periods. The water running through Cheyenne Creek and surrounding streams was referred to as a “500-year flood” with water levels so catastrophic that it destroyed the visitor park and the road leading to Seven Falls. Trees were upended, pavement completely disappeared and mud plagued the region. Despite the best efforts of the Walker family, who owned the land at the time, the park was forced to close for over two years until its ultimate sale to the Broadmoor Hotel just down the road.

The Broadmoor Seven Falls — A New Era and New Improvements

The newest owners of Seven Falls saw an opportunity in the attraction’s hardships. With the rebuilding of the park and surrounding area came improvements to help make the location more accessible and easier to visit. One change — switching to a shuttle system — was viewed with skepticism at first, but the benefits have since been greatly received. In the past, visitors might spend quite a bit of time searching for a place to park far from the falls and then trekking along the road to get to the park. The roads were crowded during peak visitation days in the summer and traffic could be quite frustrating to visitors and locals alike. Adding more parking would have increased the negative human impact on the area, so a new system was devised that allowed visitors to park and then ride a shuttle to Seven Falls. Other improvements allowed the space to become more accessible to people with mobility issues. The biggest improvement (that no one ever sees) was the addition of diversion pipes to help prevent another catastrophic flood in the future.

In addition to hiking the trails, viewing the falls themselves and perusing the gift shop, Seven Falls has added a few other attractions to the area to maximize the fun and outdoor engagement for visitors. Soaring Adventures offers a second-to-none zipline experience in South Cheyenne Canyon, with two courses and 10 lines combined with hiking, rope bridges and even a chance to rappel down a cliff while gazing at the falls. Epic doesn’t even begin to describe how unique and exhilarating the experience is.

SevenFalls also added a restaurant, making it even more convenient for visitors who might be concerned about shuttling to the park. Restaurant 1858 has cool Colorado entrees like trout, as well as a kid-friendly menu. There’s also a smaller food truck with tasty items like grilled cheese sandwiches. And, Seven Falls still holds one of Colorado Springs’ favorite holiday events, when the entire canyon is lit with spectacular colored lights that play across the frozen water. The display is the only one like it in the country and you and your favorite folks can snag cups of hot cocoa to keep you warm as you enjoy the display and get in the holiday mood.

If you haven’t made your way to Seven Falls yet, it’s highly recommended you add it to your Colorado bucket list. There’s a reason this stunning destination has been a treasured part of Colorado Springs’ history for more than 150 years and why so many people have worked to keep it protected and open to visitors. It’s just that good.

Great places to see Christmas lights around Colorado Springs to get you into the holiday spirit!

Santa Claus is Coming to Town — Colorado Springs, That Is…

We’re sharing all the places you can meet Mr. Claus, share your gift list & let him know whether you’ve been naughty or nice (don’t lie, the dude knows all).

Colorado Springs is the proud home of a variety of museums, many of them with unique features you won’t find anywhere else in the world.