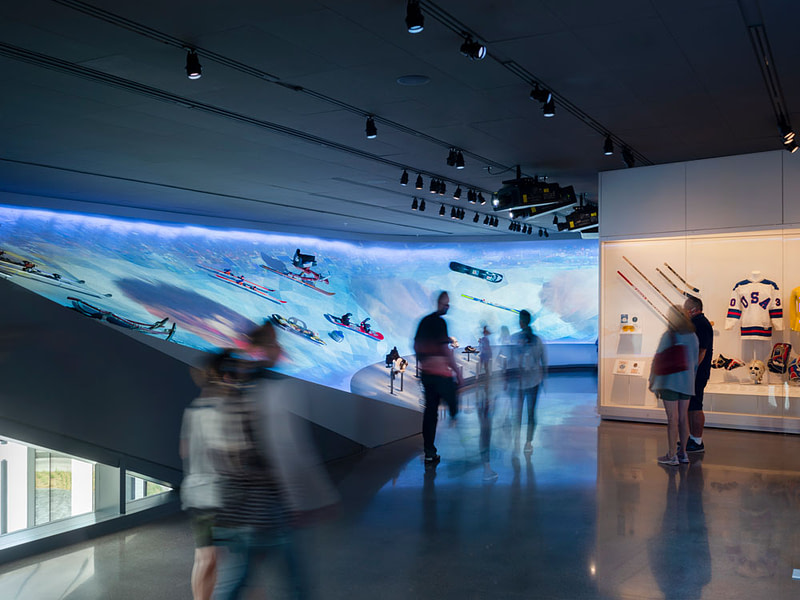 The Olympic spirit lives year-round in this incredible new museum devoted to the Olympic & Paralympic Games and its amateur athletes. Hands-on exhibits and high-tech touches create an unforgettable experience.

What you can do & see

Get into the details

The past and present unite in epic fashion at the United States Olympic & Paralympic Museum in Colorado Springs. Situated cozily just west of the hustle and bustle of downtown, the award-winning attraction offers fans of the Olympic and Paralympic Games the opportunity to take a deep dive into the history of this worldwide phenomenon. Built and designed by museum experts, the space creates a unique opportunity to learn more about the Games and about the determined and driven athletes who make it such an exceptional international event.

What makes the museum so special? Besides being an eco-friendly building with one of the best views in the Pikes Peak region (of Pikes Peak, of course) it’s anything but stuffy or boring. Visitors will find entertainment in every corner and a fun experience perfect for families, fans and anyone else who stops by. The 60,000-square-foot building is a technological marvel packed with interactive, hands-on exhibits that are as entertaining as they are educational. Engage via audio, visual and tactile experiences like the Timeline exhibit in the Work Watches gallery or step inside The Lab to check out how science and technology impact athleticism. If there’s one thing that everyone loves in a museum experience, it’s getting to look and touch without worry they’ll be escorted out.

The museum is also home to the Hall of Fame which pays homage to the record-setters that all Olympians and Paralympians strive to beat today. Who are your Team USA heroes? Did they make the Hall of Fame? Visitors can explore the list of honorees via digital pylons and find their favorite athletes. Inductees include renowned boxers Muhammed Ali and Oscar De La Hoya, as well as Para Alpine skier Diana Golden and basketball player Lisa Leslie. A select 154 Hall of Famers have been inducted since its inception, so you’ll probably need an extra visit or two to learn about them all.

Of course, it’s not all new and fancy tech. There are some things that simply must be experienced in-person, as they are. The museum has an array of Olympic and Paralynpic artifacts on display, like historic torches from Games near and far, gold track spikes from Michael Johnson’s memorable double at the Atlanta Games in 1996 and a piece of the Miracle scoreboard from the Herb Brooks Arena. These tools are souvenirs of the unifying spirit of the games and the memories made with each new wave of athletes who participate every four years.

One of the museum’s biggest draws is its incredible accessibility and universal design. It was built with the idea that every facet of the museum experience should be enjoyed by all. What does it take to become one of the most accessible museums in the country? We like to think it was the same innovation and inspiration that drives the Olympic and Paralympic Games. It goes beyond wheelchair accessibility and low-grade ramps (which are present throughout the museum), taking inclusiveness to peak levels. Visitors can count on open captioning and ASL in video content, audio descriptions for imagery and other features like screen readers and services that can be selected upon registration. If you have a need, chances are the museum has already planned for it or its friendly staff will do what it takes to make it happen.

Whether you’re an Olympic dabbler who enjoys obsessing over one sport or a complete Games fanatic who stays up all hours to catch every second of the magic, the United States Olympic & Paralympic Museum is a vast treasure trove of hopes, dreams and victory all contained in one exceptional space. Make it your new favorite attraction on your next visit to Colorado Springs and the Pikes Peak region.

Hall of Fame
Shop
Get Tickets

Where should we park?

Parking is available in the privately-operated parking lot across the street from the Museum for $15/day.  There is also metered parking available along S. Sierra Madre and Vermijo.

Can we take photos?

Guests are welcome to take pictures and videos throughout the Museum, except in the theater.  Be sure to use the hashtag #USOPMuseum to share your great captures.

Are wheelchairs and strollers available at the Museum?

Complimentary wheelchairs are available on a first-come, first-serve basis. To reserve a wheelchair in advance, please email contact@usopm.org.

The Museum does not have strollers.  Strollers are allowed but guests are encouraged to check them at coat check located in the lobby.

What is not permitted in the Museum?

Can we leave and come back on the same day?

Yes, guests may leave the U.S. Olympic & Paralympic Museum and return later in the day. Please speak with a Museum Team Member prior to leaving as admission time will depend on availability.

Should we pre-purchase tickets?

You are able to purchase tickets online up to 90 days in advance and schedule them for a specific time and date at usopm.org. This will alleviate your wait time upon arrival.

You are also able to purchase tickets on this website at pikes-peak.com/tickets or upon arrival at the Museum but admission time will depend on availability.

If you not able to attend during your scheduled reservation time, just call 719-497-1234 or email at contact@usopm.org to reschedule.

Discover one of the most innovative and family-friendly museum experiences at the U.S. Olympic & Paralympic Museum in Colorado Springs

Colorado Springs is the proud home of a variety of museums, many of them with unique features you won’t find anywhere else in the world.
Previous
Next

Cave of the Winds Mountain Park